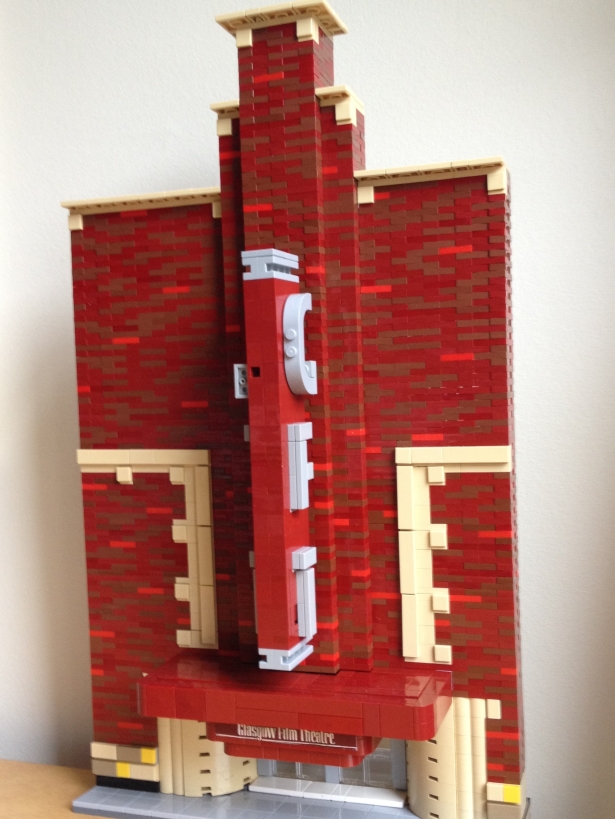 The much-loved Glasgow Film Theatre (originally the Cosmo Cinema) was the first purpose-built arthouse cinema outside of London, and the last picture house built in Glasgow before the outbreak of war in 1939.  It will be a familiar building to film-lovers across the city, and is certainly one of my favourite places in the city.

Building the GFT, was probably my biggest Lego challenge so far, but it’s probably still my favourite creation.  Although I’ve used some artistic license in re-imagining it, I think the resulting model captures the essence of this building quite nicely.

The Cosmopolitan was commissioned by cinema mogul, George Singleton in response to a growing demand for foreign language films from the Film Society of Glasgow.  Viewing of continental films had declined drastically after sound was introduced making language more of a barrier to these films among English-speaking audiences.

Designed by local architects James McKissack and WJ Anderson the building materials reflect the cosmopolitan ethos of the project; consisting of Ayrshire brick finished with faiance cornices, set on a base of black Swedish granite.  The geometric style was influenced by the modernist designs of Dutch architect Willem Marinus Dudok.

I initially thought the scale of this building would make it unfeasible to build in Lego, but by focusing on the entrance frontage I managed to keep it to a manageable size.  The large and windowless design means there’s a need for a lot of bricks; and the bulk of the construction is made from 1×2 plates.

My first attempt at a design for the GFT was on Lego Digital Designer, which allowed me to experiment with different shapes and colours for the entrance area.  It was useful to help me work this bit out, but using the digital version for the whole design would have ended up taking forever due to the intricate brickwork! The curved parts of the entrance made from tan ‘macaroni’ bricks and 1 x 2 log bricks were carried through to the real build.

When I started making the physical prototype, I had to change the scale based on how I wanted to do the big vertical block sign.  I had my heart set on making all the letters for the big sign in Lego rather then using stickers; so the scale of this determined the scale of the whole model in the end.  The sign was one of the trickiest parts of the build and took a lot of trial and error.  It’s not perfect but I ran out of ideas in trying to get it exactly right!

While the actual brick colour of the GFT is largely brownish, I allowed myself a little artistic licence and used a mixture of dark red and reddish-brown plates with a small number of bright red ones thrown in.  Using different colours gives a slightly hyper-realistic impression of the brickwork which makes it look quite striking.  Sticking to one colour would have made the frontage much more monolithic and not allowed the brick patterns to stand out.

Likewise, for the stonework at ground floor level I have used a mixture of tan, dark tan and bright yellow plates, to accentuate the stone block pattern.  Using these more pronounced and brighter colour pallettes gives the model a slightly cartoon-like quality which I quite like.  For the cornicing features I’ve used tan tiles, mounted on ‘headlight’ bricks and bricks with knobs.

The GFT build required lots of SNOT (Studs Not on Top) techniques.  There are pieces facing every possible direction – including the downward facing lighting panels under the canopy (Idon’t know why I bothered as you can’t really see them unless you stick your head underneath!).  The three tiered canopy was also quite tricky to get right and made harder by the cost and limited range of bricks in dark red.  But part of the joy of Lego architecture is solving these little problems and getting a design that you’re happy with!

One thought on “Glasgow’s cosmopolitan masterpiece: the GFT”