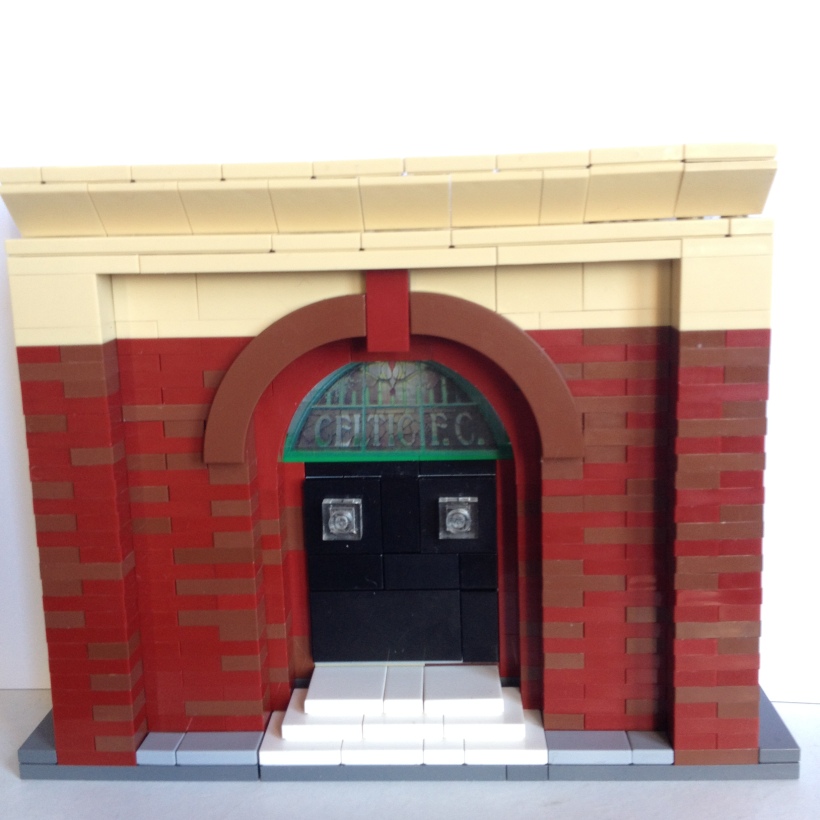 If you’re seriously thinking about any Lego architecture project, you need to get to

know the humble ‘jumper’ plate.  The ‘jumper’ or the 1×2 plate with stud offset (to give it its official title) allows you to span (or jump) the space between two studs.  This provides a means of centring parts of  the build, provides opportunities to provide added depth and even enables you to place elements of your model on the diagonal.

Jumper plates are now available in three sizes.  The 1×2,

the 2×2 and the 1×3 (which has two studs).  The best way of illustrating how they can be used is to show you some examples from my models.

Firstly, the jumper is the only way you can centre an element if you have an even number of studs. So, in my Rogano model I needed to have a central column bang in the middle of the main window.  The problem

is that the space is 14 studs wide.  So I need the column between studs 7 and 8 so that it’s central.  The answer is to place a jumper plate over studs 7 and 8 to allow the column to be placed centrally.

I use them similarly to place the left hand ice cream cone centrally in the window of the Queens Cafe.  The space is 3 studs long and the ice cream cone sits on a 2×2 brick.  So two jumper plates next to a plain tile allow the 2×2 brick to be centred.  In this instance, I could have used a double jumper which  would provide more stablility, but these are relatively new and are not that widely available yet.

The next use, is to allow a half-space for adding texture and depth.  In many of my builds I use plates with rails to provide different texture, they protrude slightly further than the bricks they attach to and provide a nice definition for signs and the like.  But if you want a little more depth, using jumpers can give you an added dimension.  For example, I use four jumpers to attach the canopy in my University Cafe model.  This allows it to stick out a little, while still being closely attached to the main body of the building.  Obviously with only one stud it’s not as strong a connection as traditional plates or bricks, which is why I use four along the length of the canopy. 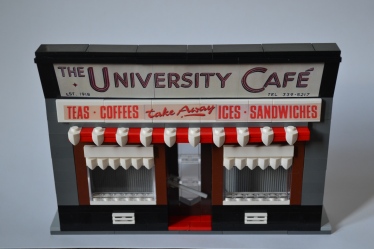 In my recent model of the Old Celtic Park doorway, use of jumpers provides the depth of the archway strucutre, allowing an added layer of brickwork sitting between the front and back rows.  This allows the more gradual staggering of the brickwork providing a more realistic interpretation of the original.  A 1×2 jumper plate sits just behind the front layer of bricks either side of the aperture.  The section of the brickwork with the arch on it sits on these two jumpers at the halfway point between the front and back layers. 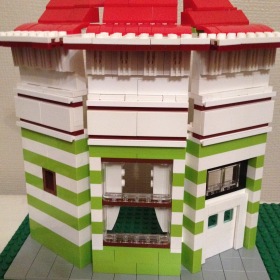 I’m currently working on a model of the Battlefield Rest restaurant, and if you know this building, you’ll realise that it’s quite challenging.  One of the main features of this building (a former tram waiting room) is an octagonal tower.  This requires the walls of the tower to be angled (using hinge plates).  The crucial role of the jumper plate here is to allow the angled walls to be secured to the base.  You can adjust the angle by moving the position of the jumper plates, or by using 2×2 jumpers in stead of 1x2s.

4 thoughts on “The joy of the jumper”