The Barrowland Ballroom has a special place in my heart.  It’s where I’ve seen some of the most memorable live performances from amazing bands, and it’s also the first Glasgow building I made out of Lego.

I had rediscovered the joy of Lego through my two sons round about 2014 and was starting to make some more imaginitive creations of my own.  But it was only after we visited Warren Elsmore’s Brickworld exhibition at Paisley Museum that my thoughts turned to buildings.  The exhibition showed Lego models of iconic buildings from across the world; it demonstrated what was possible with a bit of imagination and creativity.  I did wonder to myself, though, whether anyone had done any models of Glasgow’s many iconic buildings.  I did a bit of googling but couldn’t find anything, so I set myself a challenge to see if I could right this terrible wrong.

I chose it because it is one of the most unique and quintessentially Glaswegian buildings, and one that was very close to my heart (having been to several amazing gigs there).  It also helped, of course, that being a fairly simple design I didn’t think it would be impossible to make!  The current Ballroom was opened in 1960 on the site of the original one which had sadly burned down.  The unique illuminated sign (said to be the largest in the UK) is what makes the Barrowland so special.  For me, there is also something special about the fact that, as well as being a world famous music venue, its ground floor is essentially a covered market run by the same Glaswegian stallholder families who have been there for generations.  It is both iconic and every-day.

I started with some initial scribbled sketches and then took some close-up photos of the building to get the colours and textures right.  I soon realised that with Lego buildings, making exact replicas is neither possible nor desirable.  What ‘s important is the essence of the building – the broad scale and proportions, its key features, and the things that bring it to life.  So my Barrowland model is way too long compared to the real one, due to the limitations of Lego brick sizes, but has the right number of sections, windows, stars etc. so overall looks the part.

My sketches helped me to work out the overall type and number of pieces I might need to build it.  The bulk of the strucutre is made from dark bluish grey 1×4, 1×3 and 1×2 bricks, and 1×4 bricks with knobs.  It is ‘clad’ mostly in 2×2 light bluish grey tiles.  I use two sets of battery powered Christmas lights to light up the stars (one white, one blue) so I needed to work out how and where to make apertures for these.  The stars are the stick-on glow in the dark ones you get for the ceilings of kids’ bedrooms (I recollect my kids used to have some on their ceiling… ). 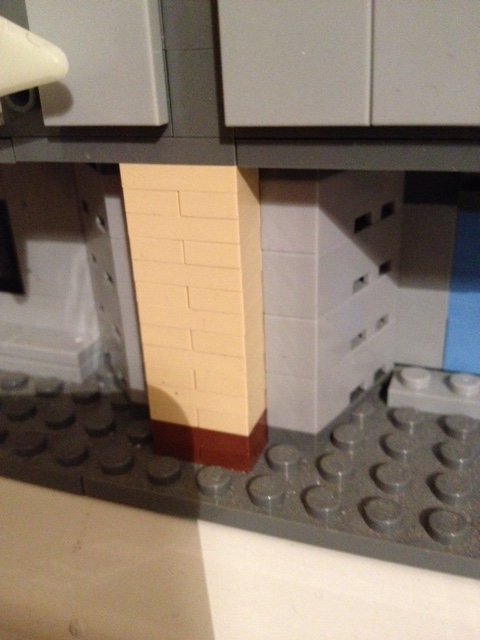 For the brick columns that hold up the main frontage I made pillars from 1×2 tan plates.  And the market stall parts are basically just flights of fancy based around a few visits and a trawl of the available images.  For the most part, when the ‘Barrowlands’ is lit up and in full swing, the market stances below are closed up, and nobody really pays much heed to them.  Most music fans only the see the teeming entranceway, with the rest of the ground floor a dark wall of shuttered steel.

Aside from the glowing stars, it’s the Barrowland sign that pulls the frontage together and makes it special.  I made this from a photograph blown up onto acetate and then laminated.  You can find out more about how I make signs here.

Overall, it took me the guts of a year to build it and around 2,500 Lego pieces.  It got me a good amount of media attention though, with articles in the National, Evening Times, the Sun and culminating in this lovely Herald magazine article .

One thought on “The famous Barrowland Ballroom in Lego”