Back in January I received a request through Twitter to make a model of the old entrance to Celtic Park’s Main Stand.  Since the former doorway is no longer there I had to make do with this photo (courtesy of the Shamrock). 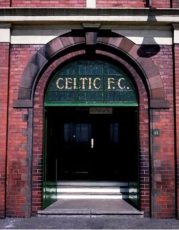 It’s a handsome piece of architecture, nothing too ostentacious, but a well-proportioned red brick archway with red sandstone finishing and a beautiful art nouveau style stained glass window.  White painted steps lead up to a pair of solid black doors.  It’s my understanding that this entrance dates to 1929 when the single tier main stand was built to replace the one destroyed in an earlier fire.  It lasted until the major reconstruction of Celtic park by Fergus McCann in the 1990’s.  You can read more about the history of Celtic Park here.

The arches made the Lego design a little bit challenging, and the inset door and steps also presented some initial problems.  There’s limited options for adding dimensions in a model that’s only four studs deep.

My initial prototype wasn’t bad, and I established an approach to using two internal arches and two of the newly available  ‘macaroni’ tiles for the external finish to the arch (unfortunately you can’t get them in dark red, so I’ve done them in reddish brown).

But the facade lacked the depth of the original and the doorway was too narrow, so I redesigned it with another layer, a wider door and an additional step (see my scribbled diagram).

The problem of depth meant that I needed to use ‘jumper’ plates to insert an extra layer of bricks.  The second layer back with the inner arch bricks is mounted on the jumper plates (these are the yellow plates in the pictures below.

The brick mixtures of 1×2 and 1×1 plates is similar to my GFT model, but there’s no bright red, and the ratio is about 3:1 dark red to reddish brown.  There are approximately 200 of these ‘brick’ plates in the model, and these make up the bulk of the structure of the build as the pics below show.

The arched ‘macaroni’ tiles are mounted on the brown 1×1 knob bricks you can see.  There’s also a tan coloured one in the brick layer above that holds the keystone of the arch in place (a dark red tile).

The back (third) layer is where the door itself is.  The brick edges are made with 1×1 and 1×2 bricks sitting behind the jumper layer.  The door is built with black tiles on a base of 1×4 bricks with knobs.  The windowed bits are black jumpers with a 1×1 transparent plate mounted on them.  The stained glass Celtic FC image is printed onto transparent adhesive paper and mounted onto transparent 1×2 bricks. 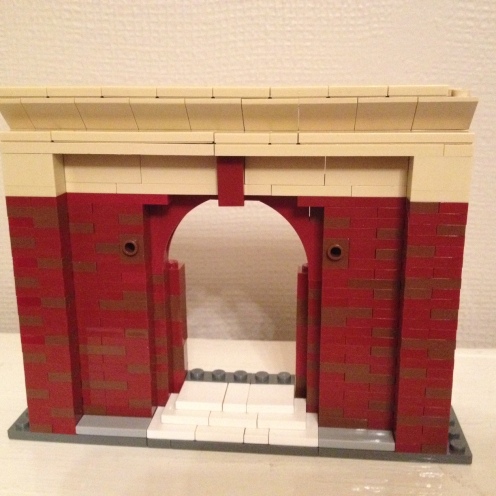 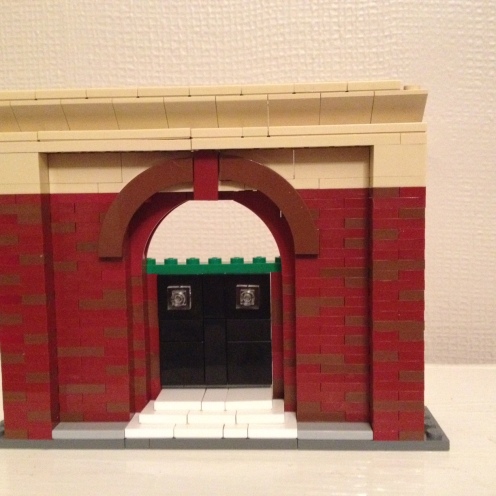 Overall, I think it’s a decent effort, given the limitations of colours and brick types.  You can purchase this model online either on Etsy or Folksy.

One thought on “Bricking Paradise”